In Memory Of Bonk 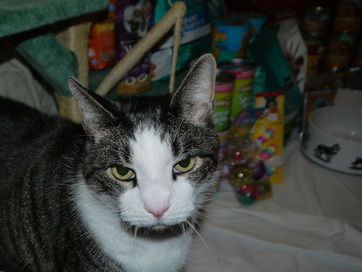 In the Winter of 2005, there was a stray cat living in the neighborhood.  The first time I met him, he was terrified of people.  When I approached him, he ran in fear, head first into the neighbors fence.  If that wasn’t bad enough, he ran down the driveway a few feet, and into the fence again.  In fact, he did this several times, “Bonking” his head repeatedly.  From that day forward, whenever I saw him, I called him “Bonk”.
​
I spent months working with him, making sure he had food, and earning his trust.  Once this was done, I wanted to bring him into the house and make him part of the family.  However, there was another cat living in the house, so I also wanted to make sure he was healthy and had all his vaccinations before they met.

At the time, I was not in a financial position to bring Bonk to the vets, so I turned to the Stoneham Cat Society for help.  With their assistance, I got all his medical needs covered.  On August 16th, 2005, Bonk was fully adopted.  He was estimated to be around 3 years old at the time.

He spent the next decade living life as a well loved and spoiled indoor cat.  In that time, he developed a number of medical issues, including diabetes and Megacolon.  In October of 2015, he was diagnosed with late stage kidney failure.  On November 29th, 2015 I had to help him cross the Rainbow Bridge.

This years “Operation Santa Paws” donation collection will be dedicated in Bonk’s memory.

Rest in Peace my friend